Sutton St.Nicholas is situated some 4 miles north-east of the City of Hereford. The village is completely surrounded by countryside. The properties range from houses over 500 years old to properties built in 2013.

The population is approximately 800 and we have a primary school newly built in 2008, which is recognised locally for both its academic standards and its welcoming approach to pupils and parents.

The village has a pub, The Golden Cross, which was completely revamped and modernised in the last few years. The pub offers a range of traditional facilities as well as a separate dining room. 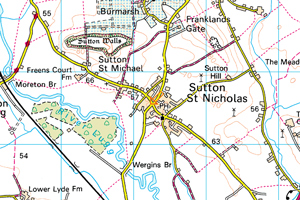 We have two Anglican churches, St.Michael’s and St.Nicholas’, both dating back to the Medieval period. Extensive work was carried out on St.Michael’s in 2007 resulting in a new roof and a completely renovated bell tower.

Our village Hall, a new build that was completed in 2008, hosts regular events such as sequence dancing, keep fit classes and the Hereford Wheelers Cycle Club as well as social events and children’s parties. The facilities including the community kitchen, are also available for commercial hire such as training courses or meetings and conferences. With 40 parking spaces available on site and a convenient location just a few miles out of the city, the village hall facilities offer a highly attractive location for a wide range of groups…